As many fans will be aware, Eugene’s name is missing from the seeded entry list of this weekend’s Donegal Rally. A rally close to his heart, it is a devastating blow not to be doing the iconic event which he has won 3 times previously.  Eugene explains below why he won’t be taking the McGeehan Motorsport MINI WRC to Donegal.

“It is with regret I have to pull my entry from the 2014 Donegal Int Rally. I would like to thank all sponsors who worked so hard over the last few weeks to try and make the rally happen for the team. Special thanks must go to Derek McGeehan of McGeehan Motorsport who pulled out all the stops in an effort to get us to the start line, but it was not to be this year.

Thank you to all our followers, supporters and fans who attended the Road Safety Awareness event at Letterkenny Shopping Centre over the weekend. It was great to see so many people take an interest in road safety in the lead up to the rally. The Donegal Int Rally is one of the largest sporting events in Ireland and is the “Crown in the Jewel” of Motorsport in Ireland and some say the best tarmac rally in Europe. I am so disappointed not to be taking part. Hope to see you all soon and will keep you informed of any future plans.

Thanks again for everyone’s support, it truly keeps us going through the tougher times. 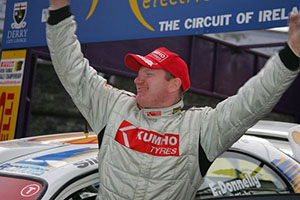